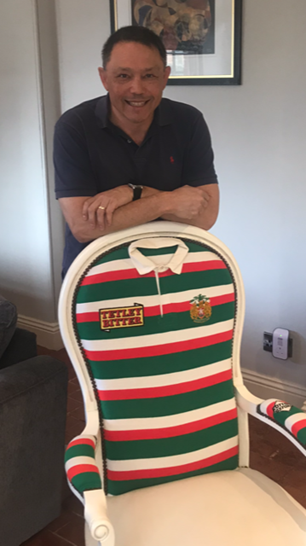 Stamford Rugby and Oakham RFC are delighted to announce that a significant donation has been made to their respective charities, namely the Tu foundation set up to support the children of our very own Savanaca Koroibulileka who died on the pitch whilst playing for Oakham RFC in 2016 and the 28 Not Out charity in memory of the Stamford player, Max Hunter.

These donations have very kindly come from one of rugby’s all time legends, England’s top ever try scorer, Rory Underwood via the generosity of Robin Brookes at Storage Concepts of Melton Mowbray.

The story goes back to Rory Underwood’s testimonial dinner when Robin bought three handmade chairs, each made using a team shirt that Rory had worn during his playing career. These chairs have taken pride of place at the Storage Concepts office in Melton Mowbray for over 20 years until recently when Robin very kindly offered one to Oakham RFC and one to Stamford RFC as a donation to each club. After chatting to Rory about the chairs he very generously agreed to, ’buy back his own chairs’ and make a donation to each club’s respective charity. Not only England’s greatest ever try scorer but also a truly generous and decent gent too.

As a final gesture Rory will also be attending the Oakham v Stamford derby match as guest of honour so when we hopefully get back to playing rugby next season make a mental note to book your lunch to see some great rugby and meet England’s finest ever winger.

On behalf of Stamford Rugby Club, Oakham RFC, the Tu foundation and the 28 Not Out charity,  we would like to extend our thanks to both Rory Underwood and  Robin Brookes at Storage Concepts  for their generosity to both charities. Your generosity is appreciated by all.